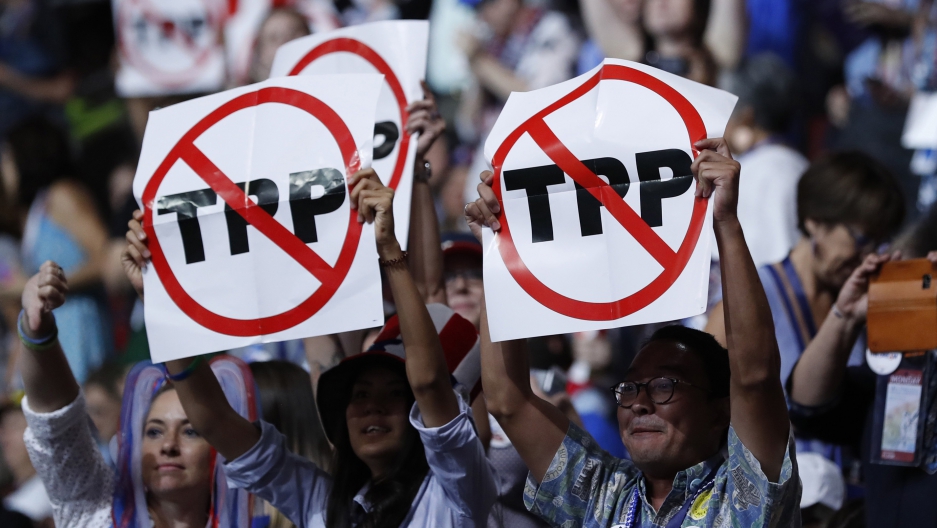 The political landscape after the 2016 election:

In the short time since Trump was elected and inaugurated, the Democratic Party establishment as exemplified by the people around the Clintons and Obama shows it did not learn the lesson of 2016. Many of its current and former constituents rejected the establishment leadership. They are looking for alternatives. In 2016, voters en masse deserted the party for a new kind of politics they found either in Donald Trump, Bernie Sanders or a little of both.

The election passed judgment on both parties’ leading figures. Distrust and discontent disrupted politics as usual. The opportunity to fill this void with a left-of-center electoral movement abounds—an upsurge built on the momentum and program of the Bernie Sanders’s campaign that resonated with tens of millions. In some fashion or another, ready or not, the 2018 midterm elections must become an arena of struggle for peace, economic security and racial justice.

So far, Sanders’s leadership in 2016 (and today) falls short in two key areas to meet this midterm challenge. First, during his campaign he did not offer Americans a plan for peace—a plan to end the war on terrorism and the foreign military adventures that have made us less safe and destabilized and laid waste to a dozen nations. Secondly, after November, instead of calling for discussion on forming a new political party he and his advisors chose to form yet another 501c entity, Our Revolution, as a vehicle to reform the Democratic Party. It would behoove Sanders to reconsider both choices.

Months after the election, a shameless hubris still drives the Democratic Party as it scrambles to blame someone for its declining appeal and 2016 losses. No, it was not Clinton’s support for the TPP or Bill’s betrayal of unions on NAFTA.  It was not due to Hillary’s 1996 use of the term “super predators” to describe black kids involved in criminal activity. It was not the serious shorting comings of the insurer-friendly Obamacare. It was not an aloof, poorly run campaign without a program to appeal to workers and the poor. It was not because the Democrats ran away from the working class and embraced neo-liberal economics.

No, it was Russian interference via its television network Russia Today, which has at most 8 million American viewers weekly. No, it was Comey’s late in the game letter about Clinton’s emails. No, it was WikiLeaks release, in collaboration with Russia, of emails showing the DNC sought to derail Bernie Sanders’ campaign.

And most recently, Clinton blamed her own party, asserting the Democratic National Committee, led by a loyal Clinton supporter, Debbie Wasserman Schulz, “was on the verge of insolvency. Its data was mediocre to poor, nonexistent, wrong.” Not exactly the kind of message designed to heal and unify the party. No, it was anything but her campaign and the neo-liberal, anti-working class politics the party has followed for 30 years.

On the Russian allegations, after months of a media full-court press to convince Americans of Russian meddling in U.S. elections, many remain skeptical. A May 2017 CBS poll showed 55 percent of Americans think the allegations are a distraction and half of those say it is serious but should not “get in the way of getting things done.” The same poll showed Americans to be more rational about relations with Russia than the political leadership of both parties. Only 32 percent thought Russia is a threat to the U.S., compared to what is arguably 100 percent of the political establishment and the corporate media. In other words, the public is not going for the warmongering bait.

Both Sanders and Trump’s campaigns rode on a crisis of legitimacy in the two parties. Today, only 18 percent of voters consider themselves strong Democrats. The no longer Grand Old Party is slightly worse off at 15 percent. So far, Trump’s new GOP maintains its loyal voter support. It is in effect a new party within a party. It is unlikely to remain so. These conditions are an opening for a working-class program—call it a “Sanders plus program”—to take hold.

The Sanders wing of the Democrats is hesitant, waiting. Will Sanders break with the party? Be sidelined? Clearly, Sanders is taking on the establishment, but working largely to reform the party, a tough job when those hanging on to power are not willing to even mention the economic reform program that propelled Sanders’s historic campaign. A quick news search finds nary a mention of free post-secondary education, single-payer health care or expanding social security from Democratic leaders. Sanders appears to be the lone voice. If Biden, Clinton, Obama, et al. wanted to rebuild the party they only need reach out to the millions who responded to Sanders demands for expanding social benefits at the expense of the billionaire class. Instead all we hear is Russia, Russia, Russia. Same from the GOP establishment.

Some pundits allege the Democratic leadership is tone-deaf to this reality, but the reality is their silence is due to their unwillingness to break with their corporate sponsors, any more than the masters of the once Grand Old Party. Instead both parties and institutions in their orbits are worried Americans are losing faith in the long-standing institutions of the “democracy of the few” embodied by the two-party system.

In January, Linda Chavez, a former Reagan cabinet member turned media pundit, put it this way in her New York Post column: “Democracy can only exist as long as the people trust its institutions. The greatest calamity of this election cycle has been the weakening of that trust.” Another reading of her statement is both Sanders and Trump upset the well-painted façade of democratic governance and that neither could be trusted to be loyal of the bi-partisan imperialist foreign policy.

While Chavez may lament this decline, those seeking a more just, peaceful society have an opportunity to step into this vacuum and begin building a new political party responsive to and built with the support of our multi-national working class, our youth and students, and built through the massive discontent with politics as usual. The first step is to agree on a working-class program for economic security, peace and racial justice. The next is to bring it into the 2018 midterm election. What fits the times and the political reality is a Sanders-plus program, the “plus” being a plan for peace.

If there is no glimmer of an alternative in 2018, the next capitalist economic crisis that is already looming will be an opening for demagogic solutions like those offered by Trump’s GOP and corporate allies of both parties. Might our Revolution find an independent political footing to meet this challenge? If not, might progressive labor unions unite with people’s movements to meet this challenge?

There is nothing in the rhetoric or actions of the Democratic Party since the election that indicates it will capitalize on the opportunity. Democratic Representative Tim Ryan of Ohio said in a New York Times interview in June, following the loss of Jon Ossoff in Georgia, that the party had become “toxic” in much of the country as voters see Democrats as “not being able to connect with the issues they care about.” In the same article, D. Taylor, the president of Unite Here, representing hospitality workers across the country said, “Millions of Americans are desperate to be led by political leaders who stand for something, are willing to take risks, and are willing to tell the truth and engage Americans where they live. That just isn’t happening.”  Labor unions, as well as other people’s movements, cannot wait for the Democratic Party to make it happen. Now is the time act, win or lose, to prepare to build on Sanders’s momentum in 2018.

Although the Tim Ryans of the Democratic Party are not likely to call their own foreign policies “toxic,” 2016 also showed millions of voters were concerned about Hillary Clinton’s aggressive support of military interventions. Sanders’ repeated criticism of her record resonated broadly with young people, progressives and the working class. Late in the fall, Trump even used this charge in stump speeches telling voters a vote for Hillary is a vote for more war.

Yet since the election, the Democratic establishment has been supporting even more aggressive and dangerous military and foreign policies, often in accord with the GOP and Trump. Witness the ratcheting up of aggression against Venezuela, Russia, Syria, Iran, North Korea, Yemen and China and the intrigues of both parties with their Israeli and Saudi Arabian junior partners in imperialism. Not a word of criticism has been heard from even progressive Democrats.

An electoral counter to such dangerous jingoism requires fielding 50 congressional candidates on a program for peace. This is the glimmer of rationality that peace-loving, oppressed and war-torn peoples around the world desperately await to develop in the citadel of imperialism. Such an effort may not win elections in 2018, but it is urgently needed to avert the present dangers of widening wars and to elevate the struggle for peace.